We watch too many movies. And when we do, we are brainwashed into thinking that everything worth seeing, everyone worth falling in love with, and the only logical backdrop for one's life is either in New York or Paris.

Now let me get one thing out of the wayNew York is New York, and if you want to move there, go ahead. OK, bye.

Now, for those that remain, let's take a good look at your Parisian reverie, because I think I have an alternative.

Ah, Le Vieux, a place underappreciated by locals and flocked to by peoples from all over the world.

1. First, Old Montreal is just as beautiful as Paris, because the builders and planners clearly used Paris as their model. You'll find narrow cobblestone streets, time-honoured structures, fountains and parks. Cafés line the streets, painters and sketchers wait to immortalize your face, and you'll find no lack of delicious food, entertainment, and places to grab a drink.

But while this may be your ideal backdrop for life, you can also escape into the 21st century if need be. Downtown Montreal is only a few minutes away. Do you know how far you have to go in Paris to see a skyscraper? Anything built after the 1800's? You have to go under the English Channel to London.

2. Secondly, living in Old Montreal, you can get anywhere in a flash. Not all the streets are cobblestone, giving you the right mix of desirable aesthetic and practicality. Hello getting to work on time! The Financial District of Montreal is within easy walking distance of Old Montreal (we're talking about eight minutes) and downtown is also just a hop and a skip away. Chinatown is your backyard. The Entertainment District is also just a few blocks north, and the Plateau, where lots of your friends probably live, is a short drive, walk, or metro ride away.

4. Old Montreal is a very sought-after area. Seeing as most of the buildings have heritage value, a dwelling obviously doesn't come for free. But compared to Paris, where your salary will only get you a chilly cubby-hole apartment that used to be dingy servants' quarters, in Old Montreal you can count on a generously heated, spacious, newly renovated condo-loft in a beautiful century-old building overlooking the waterfront. Cours le Royer is a perfect example of an old warehouse that has been reborn as a luxury residence. You're both steeped in history and part of the march forward.

5. Sure, it's pretty overrun sometimes. The area attracts over six million tourists annually. But, unlike Paris, there's definitely more downtime in Old Montreal. The tourists mostly come in the summer, and in the winter, this snow-covered wonderland is yours to enjoy. The upside of having so many tourists? The area thrives on providing high-class services to allthe hotels are the best in town, the fine dining is unsurpassed, the pubs give you an authentic quebecer experience and the clubs have lineups to get in that go all the way down the street. Unless you know somebody who knows somebody who knows somebody, then you can get in right away. And since you live a block away, you probably do.

6. We all know Paris has the Notre Dame Cathedral. Well, Montreal has the Notre Dame Basilica, where you can fill your soul with all the reverence, all the awe the Cathedral inspires with no depressing Quasimodo and no long lines to get in. Paris has the Arc de Triomphe, sure, but Old Montreal has the Cirque du Soleil Tent, which, if you think about it, provides much more entertainment to all who frequent it. We might not have the Eiffel Tower in Montreal, but consider: people thought the plans for the Eiffel Tower were so ugly that there was a movement to stop it from being built in the first place. So if you really feel the need, go ahead and find an unsightly landmark and start a viral rumour that it is one of the postcard must-see wonders of the world.

7. The best part about Old Montreal is, without a doubt, the Old Port. Of course the old city was built on the banks of the Saint Lawrence to facilitate trade. No longer Montreal's official Port, which has since moved further east and expanded considerably, the Old Port features such notable attractions as the Science Centre, Imax Theatre, the Clock Tower, boat cruises on the river, and leisurely strolls or bike rides along the riverbank. The Jacques Cartier Quay hosts everything from concerts and shows in summer to the electro-pop dance phenomenon known as Igloofest in winter. 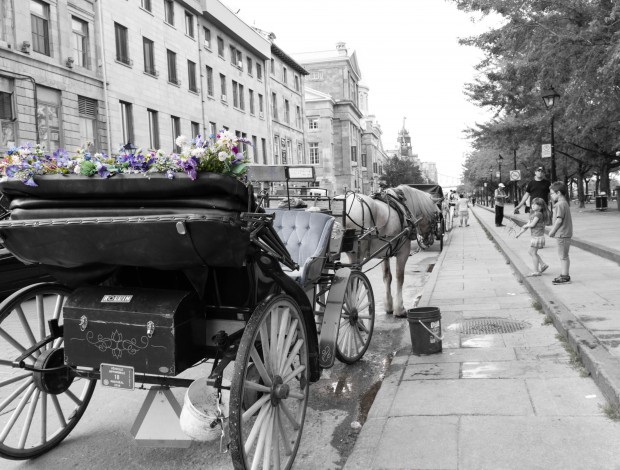